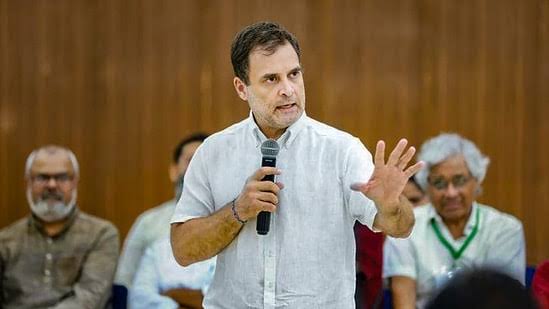 Rahul Gandhi, a Congress leader,  claimed on Sunday that the Bharat Jodo Yatra attempts to promote peace and brotherhood while accusing the BJP and RSS of spreading hatred in the nation.

Speaking to a crowd after the yatra entered Telangana from Karnataka on Sunday morning; he stated that the foot march would also bring up the issues of unemployment and rising prices.

He claimed that the BJP-philosophy, RSS’s as well as hatred and violence, are opposed by the Bharat Jodo Yatra.

He claimed that there are currently “two Indias”: one that is owned by a wealthy and privileged few, and the other by thousands of young people, farmers, labourers, and small business owners.

We do not desire two Indias. We want a one, united India where everyone may find justice and work. He remarked that the Brotherhood ought to exist in this nation.

When the yatra entered the state earlier, Telangana Congress leaders gave Gandhi a warm welcome at the Telangana-Karnataka border.

Gandhi was welcomed by Congressman Manickam Tagore, a member of the Lok Sabha who oversees party business in Telangana, A Revanth Reddy, the state Congress president, and other party officials.

As the yatra marched into Telangana’s Narayanpet district, there were a large number of activists waiting at a bridge over the Krishna River at the boundary.

The Wayanad MP casually strolled around Telangana before stopping at Gudebellur in the neighbourhood. He took a helicopter to Hyderabad and would fly to Delhi, according to sources in the Congress.

According to a press statement from the Telangana PCC on Saturday, the yatra would take a three-day respite throughout Diwali from Sunday at noon to October 26.

The yatra will then resume on October 27 in the morning from the Narayanpet district and proceed across Telangana for a distance of 375 kilometres, covering 19 assembly and seven parliamentary seats, before entering Maharashtra on November 7.

Every day, Gandhi would walk 20 to 25 kilometres (km), or “padayatra,” and engage in conversation with onlookers. He will interact with academics, community leaders, legislators, businesspeople, athletes, and actors.

Gandhi will pay a few Telangana temples, mosques, and prayer rooms a visit. The TPCC announced that interfaith prayers will also be said.

On September 7, the Bharat Jodo Yatra kicked off in Kanyakumari, Tamil Nadu. Before starting the Telangana part of the yatra, Gandhi finished the marathon walks in Kerala, Andhra Pradesh, and Karnataka.