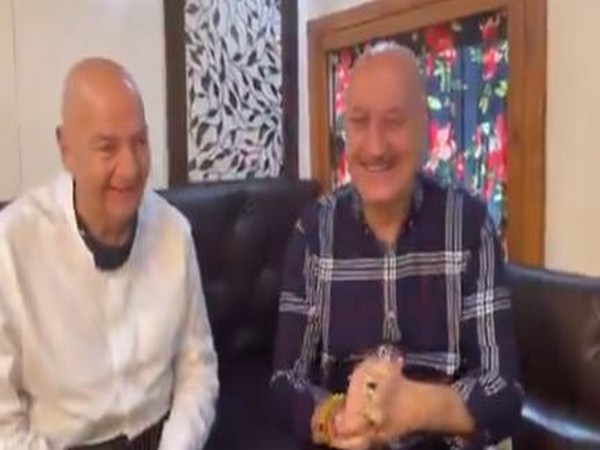 Mumbai (Maharashtra) [India], February 20 (ANI): Veteran actor Anupam Kher on Saturday shared a sneak peek into a candid conversation with senior star Prem Chopra.
The ‘Hotel Mumbai’ actor took to Twitter and shared a video from a fun conversation between the two veteran stars. In the video, Kher also shared that Chopra is the only actor who has used his real name on the screen and has earned much love and fame from it.
In the video, the ‘Kuch Kuch Hota Hai’ actor is seen doing an introduction as he says, “Friends, today I am going to introduce to such an inspirational personality, who has an amazing name… And he is the only actor in the film industry who has used his (original name) in a movie and has gained fame from it, so much so that it is still famous.”
The camera then pans to Chopra who introduces himself in his signature style delivering his iconic dialogue from the 1973 film ‘Bobby’.
A few seconds into the clip, the two senior stars can be seen bursting out in laughter, and then Kher adds, “Friends, we are fortunate that Prem Chopra has agreed to do a role in our film.”
Post which the ‘Special 26’ star said that he was having a conversation with Chopra about American actor and film director Marlon Brando who essayed the role of Superman’s father in one of the superhero films.
Along with the video, Kher wrote in the caption, “Prem naam hai mera.. Prem Chopra,” as he quoted the popular dialogue, which translates to (Prem.. Prem Chopra is my name).”
Chopra has worked in more than 400 movies during his career and is famous for his villainous roles and powerful dialogues. (ANI)