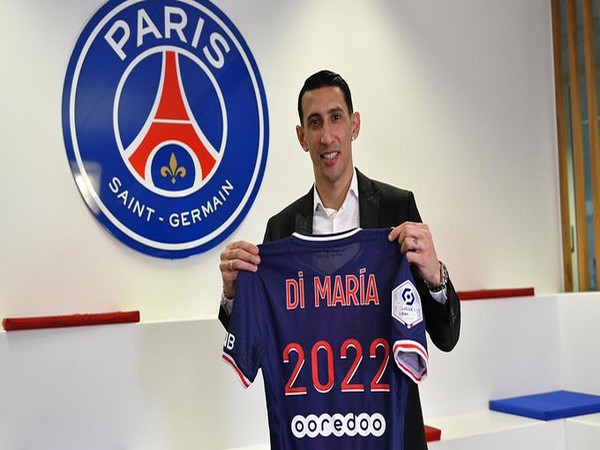 Paris [France], March 13 (ANI): Paris Saint-Germain (PSG) midfielder Angel Di Maria has signed a one-year contract extension with an option of a second year with the Ligue 1 champions on Friday.
The 33-year-old has made 248 appearances for the side, scoring 87 goals and making 99 assists while playing a key role in the club’s success over recent seasons.
The left-footed Argentine has notched up 16 trophies so far for the Parisian club: four Ligue 1 titles (2016, 2018, 2019 and 2020), four Coupes de la Ligue (2016, 2017, 2018 and 2020), four Coupes de France (2016, 2017, 2018 and 2020), and four Trophees des Champions (2016, 2018, 2019 and 2020).
The midfielder has the second-most assists in the history of Paris Saint-Germain, setting up 99 goals for his teammates just behind Safet Susic’s total of 103. “Fideo” is also the eighth-highest scorer (87 goals) in the history of the Rouge & Bleu. The Rosario-born player has also picked up 104 caps and scored 20 goals for “La Albiceleste”, the Argentina national team.
On Thursday, PSG played out a 1-1 draw against Barcelona in the Champions League clash which took the French side through to the quarter-finals 5-2 on aggregate.
French striker Kylian Mbappe opened the scoring as he converted the penalty in the 30th minute of the game. The lead did not last long as Lionel Messi’s 37th-minute strike squared-off things for the visitors at Parc des Princes. No further goals were scored in the second half of the clash.
Mbappe also (22 years, 80 days) became the youngest player in history to score 25 Champions League goals, taking the record from Messi (22 years, 286 days).
PSG sits at second place with 60 points in 28 matches so far. They will next take on Nantes on Monday. (ANI)