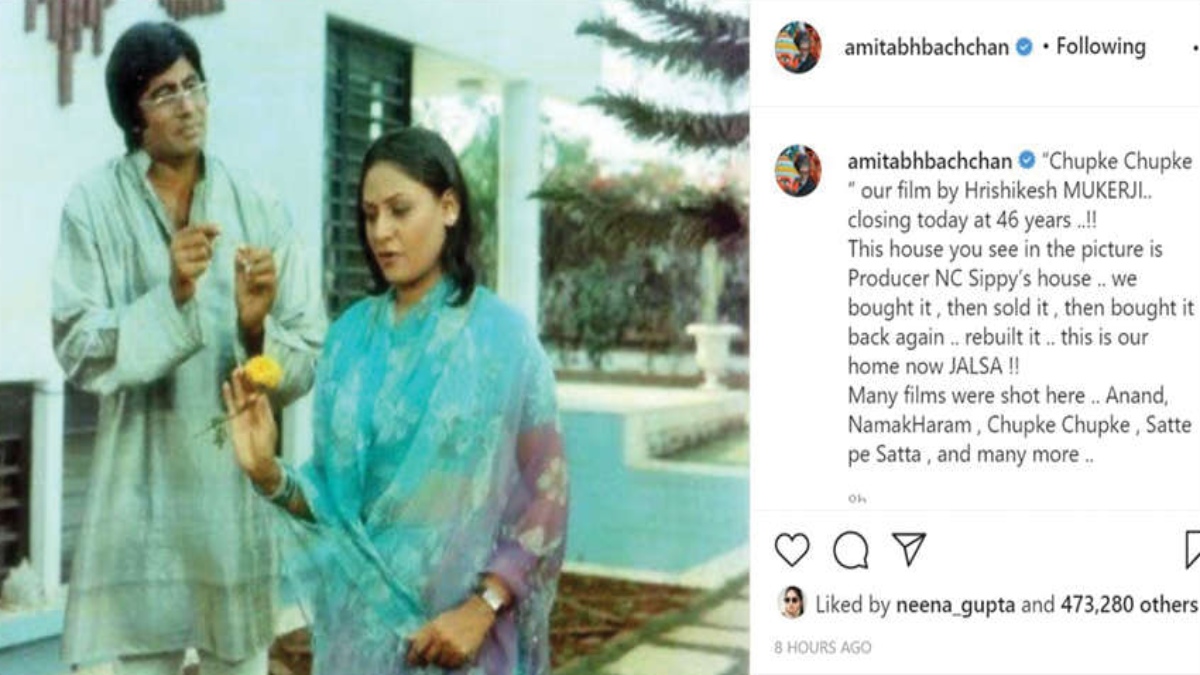 The 78-year-old actor took to his Instagram handle and shared a still with Jaya Bachchan from ‘Chupke Chupke’ where both the actors can be seen standing against the backdrop of NC Sippy’s bungalow, now Jalsa. Along with the photo he revealed in caption, “‘Chupke Chupke’ our film by Hrishikesh MUKERJI.. closing today at 46 years ..!! This house you see in the picture is Producer NC Sippy’s house .. we bought it, then sold it, then bought it back again .. rebuilt it .. this is our home now JALSA !! Many films were shot here .. Anand, NamakHaram, Chupke Chupke, Satte pe Satta, and many more ..”

Bachchan shared the same post on his Twitter handle and a few more pictures from the 1975 film. The first photo was a behind-the-scenes one, featuring Amitabh with the film’s director, where Big B could be seen rehearsing a scene with the filmmaker. The second picture was a still from a scene that featured Amitabh with his co-stars Dharmendra and Asrani.

‘Chupke Chupke’ had an ensemble cast including Dharmendra, Sharmila Tagore, Amitabh, Jaya, Om Prakash, among others. In the film, Amitabh played the role of Professor Sukumar Sinha with his co-star and wife Jaya, who played the role of Vasudha Kumar. Dharmendra was cast as Parimal Tripathi, a botany professor. Their camaraderie as friends was one of the major highlights in the movie and is still remembered.

Amitabh was recently cast for the Indian adaptation of ‘The Intern’ opposite Deepika Padukone.

TAAPSEE PANNU LOOKS ELEGANT AS SHE GAZES AT HER LOCKDOWN SUNDAY