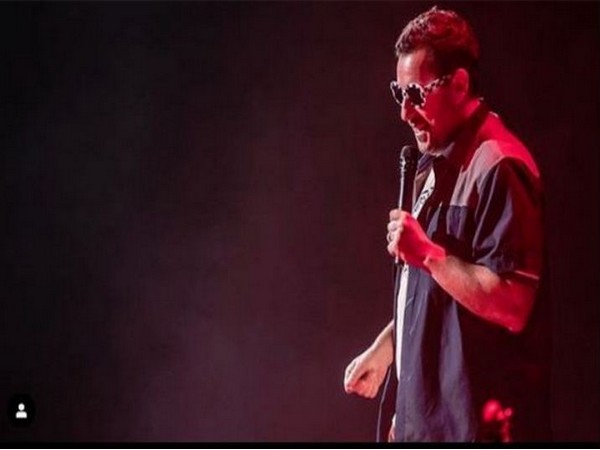 Washington (US), February 17 (ANI): American actor and comedian Adam Sandler recently celebrated 25th anniversary of his film ‘Happy Gilmore’ by paying homage to the classic with an appropriate tribute.
The 54-year old star took to his Twitter and shared a video of his impressive swing on the golf course, similar to his role in the 1996 film. In the video, Sandler said, “It’s been 25 years since I’ve done this. Let’s see what happens, I’m scared.”
Paying tribute to Christopher McDonald’s antagonist character, Shooter McGavin, Sandler jokingly said “Shooter McGavin, this is for you,” before smashing the golf ball.
Christopher McDonald, who portrayed the character of McGavin, responded with a humorous video of his own on Twitter.
In his video, McDonald proceeds to humorously tap a golf ball into a glass laid out on his living room floor before breaking character to thank fans and Sandler for the film’s success over the past 25 years.
In the film, Sandler stars as a retired hockey player who seeks to put his golf skills to the test to save his grandmother’s house. Sandler starred alongside Julie Bowen, Frances Bay, and Christopher McDonald, who appeared as Shooter McGavin. (ANI) 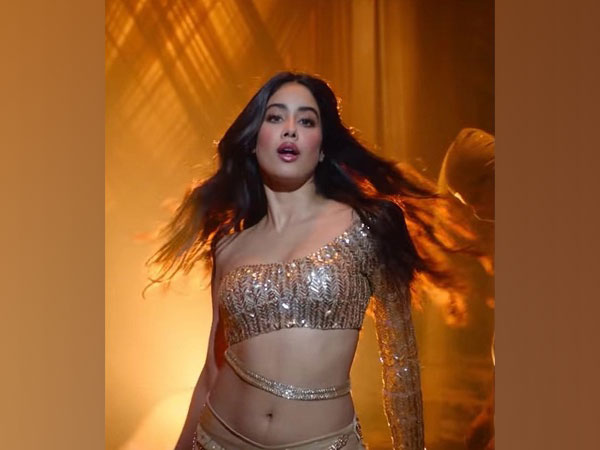 Mumbai (Maharashtra) [India], March 3 (ANI): The makers of the upcoming horror-drama ‘Roohi’ on Wednesday dropped a dance number, ‘Nadiyon Par’ featuring Janhvi Kapoor as she sets the dance floor on fire.
The ‘Gunjan Saxena’ star took to Instagram and shared the video of the peppy dance number. The song is a rendition of ‘Let the Music Play’, the famous English track by Shamur that thumped the whole nation.

The two minute-twenty-seven-seconds video showcases a dazzling display of Kapoor’s moves. The actor sizzles and shines in the latest version of the song. Dressed in shimmering gold, Kapoor looks drop-dead gorgeous as she grooves to the foot-tapping number. Adding to her sexy avatar, the melody is sure to cause mayhem on dance floors all over.
Composers Sachin- Jigar says, “Let the Music Play is a cult tune, and the opportunity to present this song to a new generation was irresistible! Nadiyon Paar absorbs the elements that made the original so special and sprinkles a bit of Roohi’s magic, to bring that extra tadka.”
Apart from composing the track, Sachin – Jigar also helms the mic for the updated version, singing it along with Shamur, Rashmeet Kaur and IP Singh. The lyrics are penned by Shamur, IP Singh and Jigar Saraiya.
While retaining the funky essence of the original tune, the number also gives itself a fresh zing for gen-next.
‘Roohi’, which is the first major Bollywood release post lockdown, was set to hit the cinemas in the first week of June last year, but the film had to be postponed due to the ongoing coronavirus pandemic.
The upcoming horror-comedy will also become the first film to arrive in theatres after the Ministry of Information and Broadcasting allowed cinema halls nationwide to operate at full capacity from February 1 with COVID-19 safety protocols put in place.
The film is set to hit the theatres on March 11, this year, and is based on the lines of the 2018 hit film ‘Stree’, which featured Shraddha Kapoor and Rajkummar Rao in lead roles. (ANI)

Dolly Parton gets shot of COVID-19 vaccine she helped fund 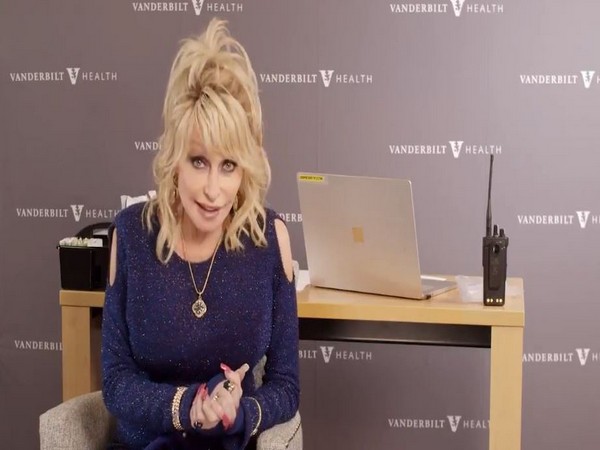 Washington [US], March 3 (ANI): Legendary country singer Dolly Parton has received her first dose of the coronavirus vaccine.
The 75-year-old singer took to Twitter and posted a photo and video of herself at the Vanderbilt University Medical Center getting the injection from a medical professional. 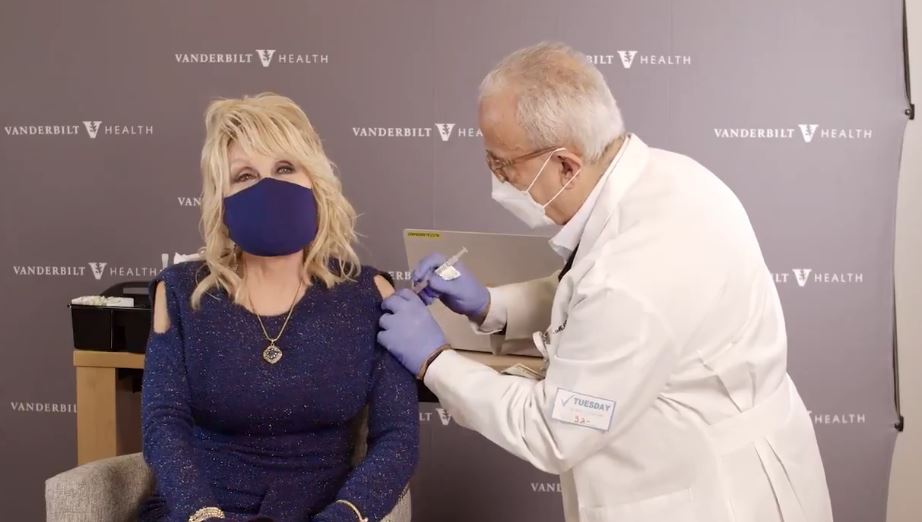 The ‘Jolene’ singer captioned the video, “Dolly gets a dose of her own medicine. I’m finally going to get my vaccine, I’m so excited!” Parton exclaimed. I’ve been waiting a while, I’m old enough to get it and I’m smart enough to get it.” 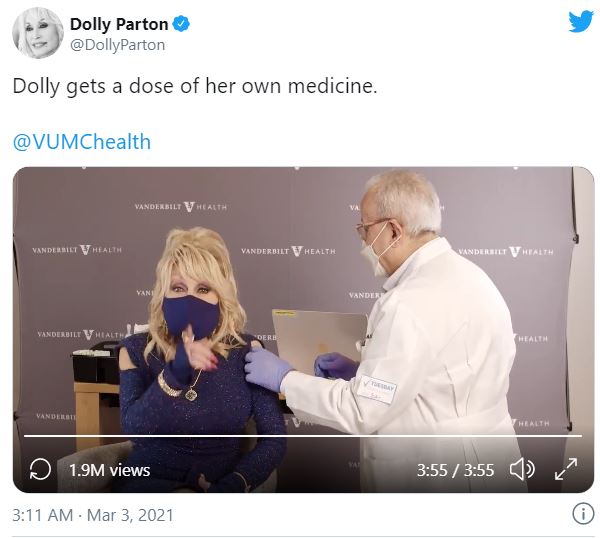 Parton then sings a ‘vaccine’ version of her famed hit, ‘Jolene’. She is later seen putting on a blue mask as the doctor enters the video to administer the shot. Parton then bravely takes the shot without a flinch.
According to Fox News, back in April 2020, Parton announced that she was donating USD 1 million to researchers at the university to help develop a vaccine.
According to the New England Journal of Medicine, the donation made by Parton and the work done by researchers at Vanderbilt during trial phases directly led to Moderna announcing it had produced a coronavirus vaccine that is nearly 95 per cent effective. (ANI)

‘Back to basics’, says Vicky Kaushal as he shares glimpse from horse riding session 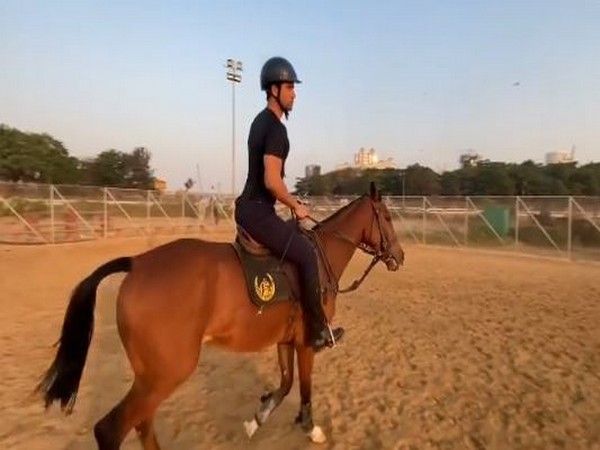 Mumbai (Maharashtra) [India], March 3 (ANI): Bollywood star Vicky Kaushal on Wednesday treated fans with a glimpse from his horse riding session.
The ‘Masaan’ actor shared a video on Instagram in which he could be seen riding a horse on a humongous ground.
The short clip showcased the Sun in the background with Kaushal sitting easily on the saddle and riding a horse smoothly.
The ‘Uri: The Surgical Strike’ actor captioned this video as, “Walk and trot, back to basics.”
It seems like Kaushal is indulging in the horse riding session in order to prepare for his superhero role in the film ‘The Immortal Ashwatthama’.
More than 1.7 million fans liked the post on the photo-sharing platform while many chimed into the comments section to laud the actor’s dedication to his work.
Kaushal has been preparing for his upcoming role for a long time. He is putting in long hours at the gym to make sure he gets the physique right.
Kaushal has much-anticipated projects in the pipeline, like ‘Sardar Udham Singh’, ‘The Immortal Ashwatthama’ and the biopic on Field Marshal Sam Manekshaw. (ANI) 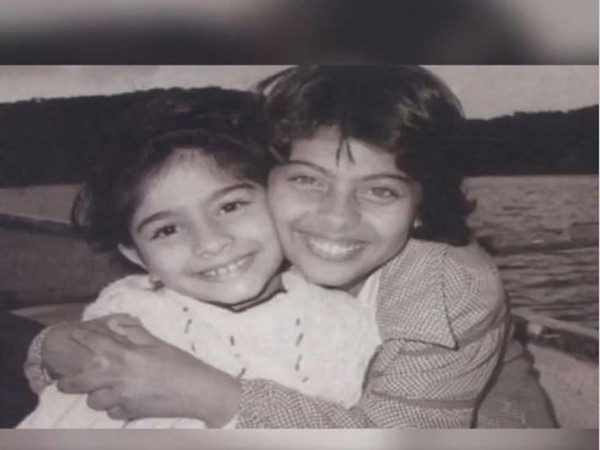 Same to same phir bhi alag. Happy birthday my darling.. wish you one ton of love, luck with a side health and wealth! @TanishaaMukerji pic.twitter.com/uOL5Mtb0W5


The eight-second long clip starts from an all smiles monochromatic picture of Kajol and Tanishaa as the ‘Tanhaji’ star hugs her little sister. The second photo is from their childhood days in which they visited a hilly location.
As the video progresses, it features two more photos, in one of them they pose randomly with each other, while in the other one the duo is dressed in a gown as they hold hands and strike a pose for a photoshoot. In the backdrop plays the subtle tone from Prateek Kuhad’s much-loved song ‘Kasoor.’
Penning down a sweet birthday note, the ‘Ishq’ actor wrote, “Same to same phir bhi alag. Happy birthday my darling.. wish you one ton of love, luck with a side health and wealth! ” (and added four kissing emoticons).
Kajol’s husband Ajay Devgn also sent birthday greetings to Tanishaa and posted a picture of Kajol, Tanishaa and himself on Instagram. 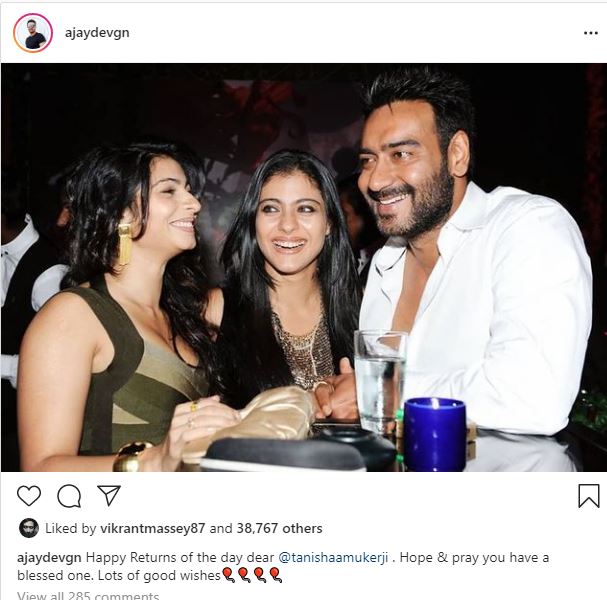 He noted, “Happy Returns of the day dear @tanishaamukerji . Hope & pray you have a blessed one. Lots of good wishes.” (and added red balloon emoticons). (ANI) 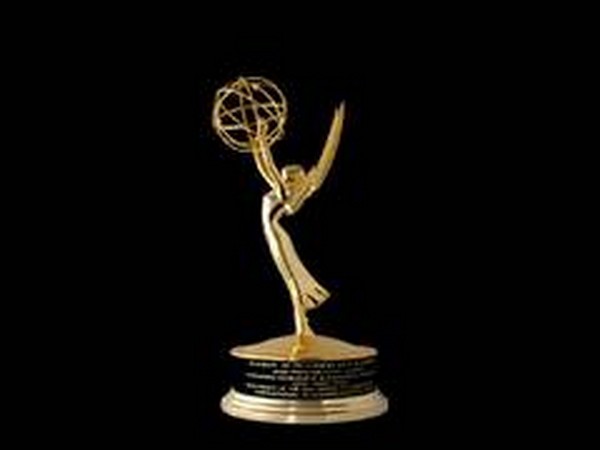 Washington [US], March 3 (ANI): CBS and the Television Academy announced the airdate of the 73rd Emmy Awards on Tuesday (local time). This year’s Emmys will air live on Sunday, September 19 at 8 p.m. ET (which is 5 p.m. PT). The ceremony will air on CBS as well as on-demand on sister streamer Paramount Plus.
According to Variety, the hosts, producers and venue for the Emmys will be announced at a later date. The Television Academy also still has to decide how to handle this year’s Creative Arts Emmy Awards and whether it will be held over multiple nights like last year, or return to the previous setup of taking place over two nights the weekend before the primetime ceremony.
A lot can happen in the world between now and September, which is why CBS and the TV Academy will likely wait a beat before determining if it will be safe to return the Emmys to some sort of normal event. Last year, ABC aired a mostly virtual Emmys, with host Jimmy Kimmel and a handful of presenters inside the Staples Center, and most nominees and winners dialling in remotely.
CBS has no shortage of host possibilities for this year’s Emmys, starting with late night hosts Stephen Colbert and James Corden. Expand the net to other ViacomCBS properties and that could also include Comedy Central’s Trevor Noah or Showtime’s Desus & Mero. CBS also has ‘The Equalizer’ star Queen Latifah, who is no stranger to hosting.
The TV Academy’s 2021 calendar as well:
June 1, 2020 – May 31, 2021
Eligibility period for Emmy entries
February 11
Online entry process begins
March 31
Deadline to apply for membership to guarantee voting eligibility for both rounds of the 73rd Emmy competition and for members to secure member entry fee discount. This date also applies to former members. Application must be completed and paid in order to qualify.
April 6
Deadline for current voting members to apply for hyphenate voting status
May 13, 6 p.m.
Entry deadline for ALL entries that were originally presented 6:00 PM – 2:00 AM, June 1, 2020 – May 31, 2021 (including hanging episodes); upload deadline for all entry materials
June 17
Nominations-round voting begins
June 28, 10 p.m.
Nominations-round voting ends
Tuesday, July 13
Nominations announced
July 27
Deadline for errors and omissions to the nominations
August 13
Final-round videos available for viewing
August 19
Final-round voting begins
August 30, 10 p.m.
Final-round voting ends
September TBD
Creative Arts Emmy Awards and Ball
September 19
CBS Telecast and Governors Ball
(All dates are subject to change.) (ANI) 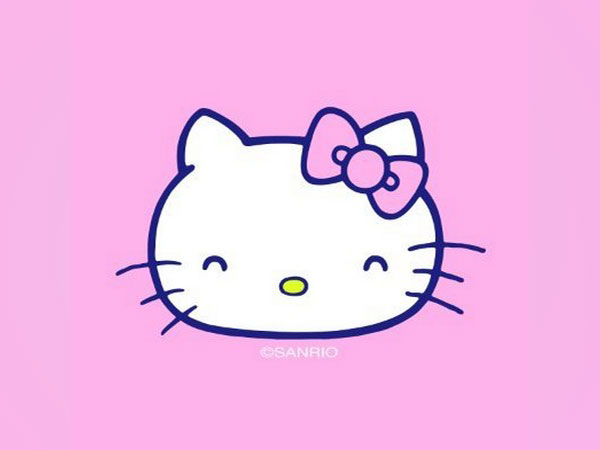 Washington [US], March 3 (ANI): The fans of the much loved fictional character ‘Hello Kitty’ now have a reason to rejoice as animation veterans Jennifer Coyle and Leo Matsuda will helm the New Line feature. It has been planned as an animated/live-action hybrid film.
According to The Hollywood Reporter, Lindsey Beer (Chaos Walking) of Known Universe penned the screenplay. Known Universe will also executive produce the film.
Beau Flynn and his FlynnPictureCo. will produce the film, which marks the only time Sanrio has granted film rights to ‘Hello Kitty’ and its other popular characters – including Gudetama, My Melody and Little Twin Stars, among others – to a major film studio.
As per The Hollywood Reporter, Chanel Bowling will oversee the project for FlynnPictureCo. Richard Brener, Celia Khong and Paulina Sussman will oversee the production for New Line.
Coyle, who is producing and directing the project, has credits on massively popular animated series like HBO Max’s ‘Harley Quinn’ and Fox’s ‘Bob’s Burgers’.
Matsuda has worked on Disney titles ‘Big Hero 6’, ‘Zootopia’, and ‘Ralph Breaks the Internet’, as well as ‘Abominable’ for Dreamworks Animation. He made his directorial debut the short ‘Inner Workings,’ which premiered before Disney’s ‘Moana’ and was shortlisted for the 2017 Oscars. (ANI)