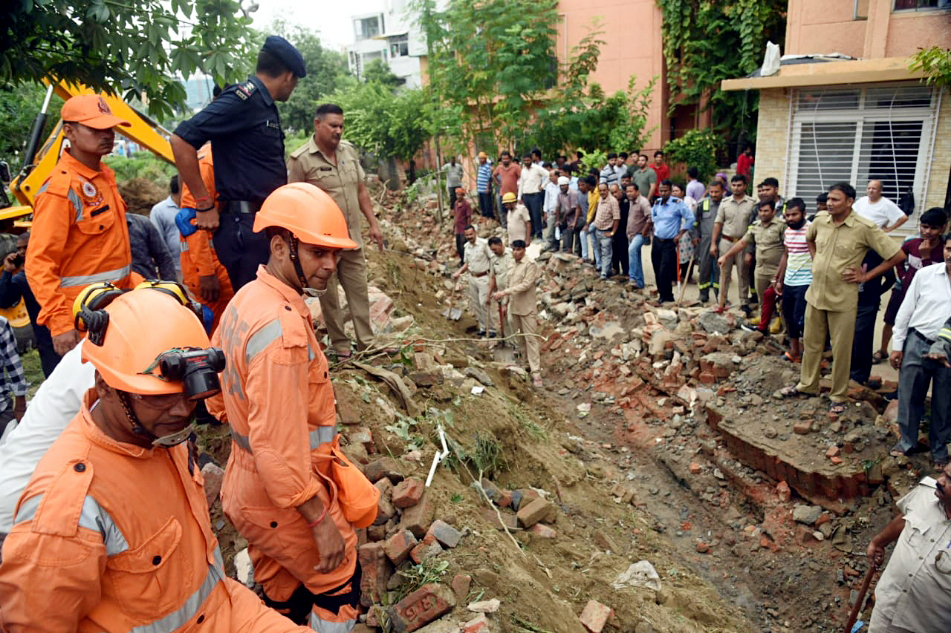 The Gautam Buddha Nagar Police have filed an FIR following the death of four people in a wall collapse incident in Sector 21 on Tuesday and have arrested a sub-contractor who supplied labourers to the contractor.
Sub-contractor Gul Mohammad was arrested from Sector 20, police said. They said an FIR has been lodged on the basis of the complaint by the family. The Chief Executive Officer of the Noida Authority has confirmed that the contractor will provide compensation of Rs 5 lakh to each of the deceased’s kin.
Four people were killed after the boundary wall of a residential complex in Sector 21 of Noida collapsed on Tuesday morning.
According to Noida District Magistrate, Suhas LY, the incident took place after the boundary wall of the Jal Vayu Vihar Society collapsed during the cleaning work of a drain adjacent to it. The Noida Authority conducted the drain cleaning.
Police and fire personnel were deployed at the spot after the incident. Nine workers were rescued and personnel from NDRF and the Fire Brigade are conducting searches.
A guard of the society said that 13 people were deployed for the repair and maintenance of the drain when the boundary wall collapsed around 10 a.m. Officials said nine workers have been rescued so far.
Uttar Pradesh CM Yogi Adityanath expressed his grief over the loss of lives in the incident and directed senior officials to continue rescue operations on a war footing.
The Noida District Magistrate said a detailed investigation will be conducted to ascertain the cause of the wall collapse.

Plea in court to hold ‘urs’ in Gyanvapi